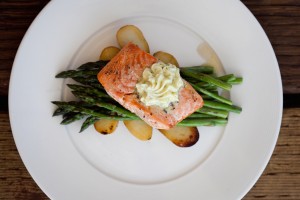 Ray’s seafood restaurant in Seattle has a rich history with Copper River salmon. In 1983 Jon Rowley brought the first Copper River to Ray’s Boathouse to serve to guests, prior to this it was typically canned and shipped to Asia. It was an instant favorite and has become a coveted seasonal delicacy ever since.

Featured wine pairings by the glass and bottle, including – Pinots and big, rich chardonnays, that compliment the fat bellied flavor of the Copper River salmon, as well as King and Coho.

Both Venues Will Offer the Following: