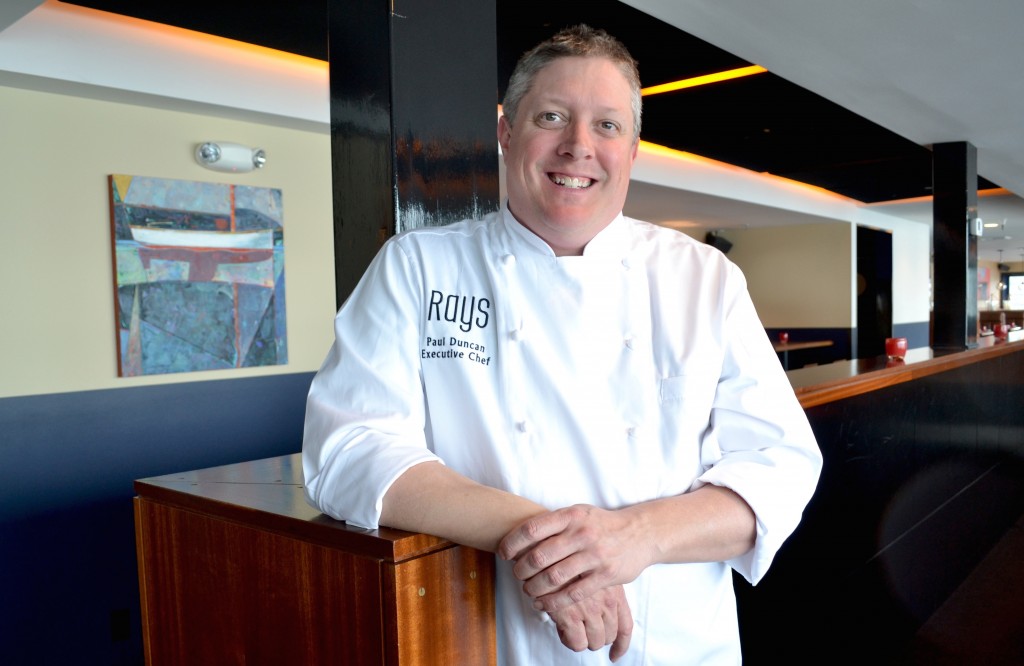 With Ray’s since 2013, Chef Paul began overseeing the kitchen team in February 2014 when he was promoted to Chef de Cuisine of Ray’s three kitchens (Boathouse, Café and Catering). We are thrilled about his promotion and new role as the sixth Executive Chef of Ray’s!

“Paul’s promotion to executive chef is based on the strong level of leadership he provides to our program in support of the values that have made Ray’s the iconic Pacific Northwest seafood destination it remains today,” said Ray’s General Manager Douglas Zellers. “This leadership has allowed Paul to build and mentor a team that brings these values to life every day. Expect some exciting things from Ray’s as Paul continues to drive our culinary program forward!”

Chef Paul has put his stamp on Ray’s fresh seafood menus through his use of Asian flavors, from Hawaii to Japan, in dishes like our Hamachi Crudo with avocado wasabi and sweet soy. He has also brought fresh pasta to the menu, and all pastas are handmade in-house daily by our culinary team. He worked in Italian restaurants in Portland for the better part of a decade and developed a fondness for fresh, well-prepared Italian food. Then it was off to Hawaii to work at Bubba Gump Shrimp Company, followed by four years at the Ritz Carlton Kapalua.

Paul’s commitment to fresh, seasonal and housemade, lives on at Ray’s today. He looks forward to seeing you soon!

Get to know Chef Paul:

A Pacific Northwest native, Paul began his chef career in Portland and spent time in Hawaii before settling in Seattle in 2012. He first worked in the food industry at the age of 14 when he sold Hebrew Nationals at the Portland Saturday Market. As a college student in Oregon, he found work in kitchens to pay the rent, but around the age of 21 he started taking cooking seriously. Working for Widmer Brothers Brewing in their Gasthaus Pub kitchen, he was introduced to the brigade system, how to work in a proper kitchen, and with a head chef.

Working at Assaggio in Southeast Portland in the late 1990’s as the chef’s right hand, Paul received a crash course in precision, speed and Italian cuisine. Assaggio won restaurant of the year during his time there, and he absolutely fell in love with Italian cuisine and ingredients. Next, Paul worked at Serratto, an upscale Italian restaurant in Northwest Portland. This was a neighborhood known for progressive restaurants and Paul had a rich experience working with talented, up-and-coming chefs. Learning new techniques and paying attention to different purveyors, farmers and foragers to source ingredients, Paul and his colleagues took part in the birth of the farm to table movement in Portland.

Paul went on to work at Caffe Mingo and Tabla in Portland before moving to Hawaii in 2008. He spent five years in Maui, first at Bubba Gump Shrimp Company for one, and then the Ritz Carlton Kapalua for four years. Before joining Ray’s Boathouse & Café in 2013 as executive sous chef, Paul worked at The Hi-Life in Seattle. He was promoted to Ray’s chef de cuisine in 2013.

Inspired by Mario Batali, and all chefs unafraid to do what they want, Paul ultimately credits his mother with his interest in cooking. As a child, he loved joining her in the kitchen to bake bread, taste desserts off the Kitchen-Aid paddle and feel the warmth of the oven or the stove while sauces were simmering.

When Paul is not hard at work in the kitchen, he can be found seeking adventure through golf, hiking, running, swimming and boating.