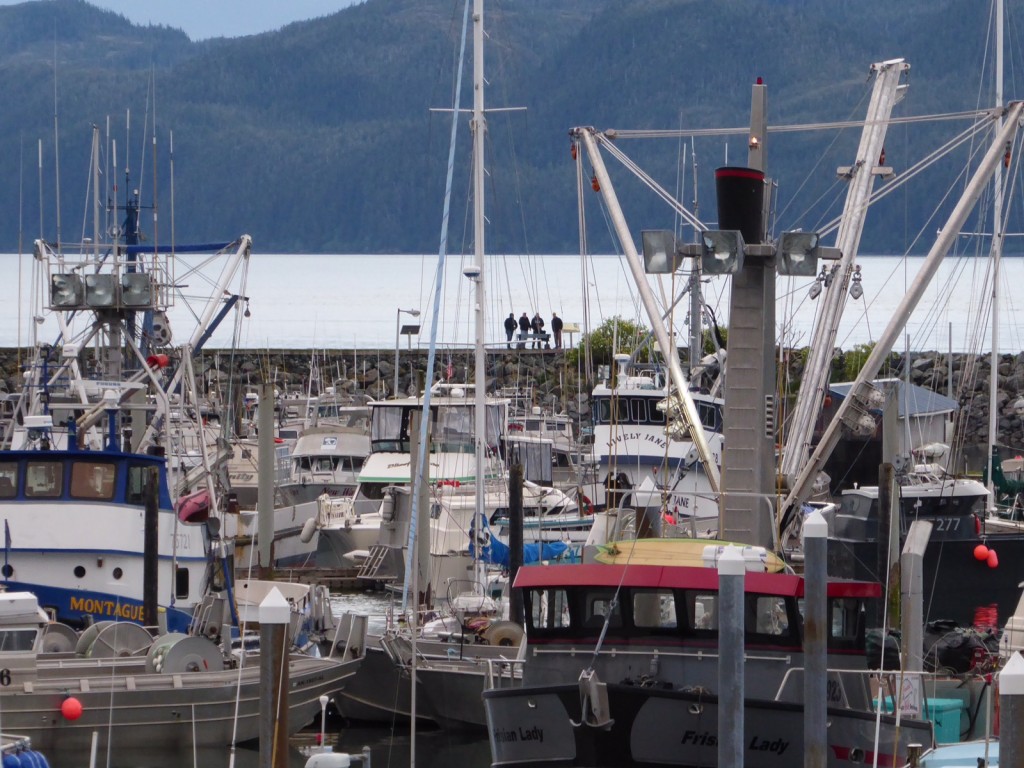 Our team had the exciting opportunity to visit the Copper River in Cordova, Alaska this May for the start of the Copper River salmon fishing season! Our GM Douglas Zellers, one of our owners and Ray’s Founding Partner Russ Wohlers, Executive Chef Paul Duncan and Executive Sous Chef Steve Hauch spent a week delving into the ins and outs of the fishing industry, talking with multi-generational Cordova fishermen and exploring the gorgeous local scenery.

A big thank you to Ocean Beauty Seafoods who were wonderful hosts to our team! They enjoyed a flyover of the Copper River and a tour of their processing facility.

Here are some highlights and insights from Alaska by our team, and a short video by our Executive Sous Chef Steve Hauch of the first Copper River catch!

Protect Your Environment: “You’re not just buying fish, you’re buying the life of a fisherman – Bill Webber Jr., Fisherman. ” Being immersed in a community that is 99.9% dependent on fishing is an eye opener. These fisherman are dependent on catching enough fish to pay their mortgage or buy clothes for their children. There was a real sense of anxiety as 500+ boats left the harbor, an air of anticipation as the reports trickled back in, and disappointment as they unloaded what was a very small catch even for an opener. However, the captains we spoke with were optimistic and in it for the long haul. They know the fish will hit, they just don’t know when. But the immediate impact of not catching fish is real.

Fresh and Safe Fish:  Watching the entire process from an aerial flight over the fleet on the morning of the first opener, to watching the fish arrive via video at Rays in less than 18 hours was impressive.  When we say we have fresh fish – we really have fresh fish.  The Ocean Beauty supply chain was very well managed. The facilities and boats were all very clean and organized. The crews were all very friendly.  It is a symbiotic relationship, we need each other to perform well. After all, what is Copper River Salmon without the story or the restaurant guests who are willing to pay for quality fresh fish.

Time Tested yet Looking Forward:  Fishing in some fashion is as old as perhaps man himself.  Some boats, captains, and crew certainly looked that part. However, without leaving that salty realm, other captains are deeply immersed in innovation. On one of his walks Russ made conversation with a gentleman named Bill Webber Sr. who was mending his nets in a parking lot. Low and behold he was the fisherman that worked with Jon Rowley back in the late 70’s and he caught and transported the Copper River Salmon to Rays for the ‘big show and tell’ in the early 80’s.  As big as that state is, it still remains a close knit small community.

Bill Sr. Suggested we visit his sons boat “Paradigm Shift” and hear about the advances he is making in how the fish are cared for until they are delivered to your door. Bill Jr. gave us a short tour of his boat and explained some of the things that he is doing that should change the industry over time as people adopt them.  Bill Jr. is an independent fisherman who sells his own catch via his website.

He told a tale that sounds like one you may read in a book: He is the son of a man who has lived and fished in Cordova for 60 years, he has been fishing since he could see over the rail, his wife does the books, he builds boats and fishing gear. But Bill Jr. is taking it forward. He has bar code tags for each fish he catches that links that fish through the supply chain and directly connects it to his on board inventory management spreadsheets. He has innovated an intravenous pressure bleeding system that removes all blood from the fish in about 20 seconds thus dramatically stalling the onset of deterioration, and he is working with transportation companies to get the product to the destination faster.

If you read his website you will notice phrases like lead by example, change the industry, and total quality.  This is similar to the shift that Bruce Gore created in the late 70’s when he pioneered frozen at sea. Once we had that product we never looked at frozen fish the same again, and it eventually became standard.  We can see the same thing happening with Bill Webber Jr.’s operation.